"The Church Needs To..." Misconceptions About Faith Based Charity

A number of years ago I was talking with an old friend who had not been to church in a while. One of the reasons he gave was that he did not feel that churches were doing enough to help people in need. While I ceded that there was always room for improvement , I also told him about a number of outreaches my church at the time was involved in. He responded, rather curtly  "Do you train them for jobs?" When I acknowledged that we didn't do that, the conversation completely shut down. He wouldn't listen to anything else I had to say.

Certainly,  this does serve as a sobering  reminder to believers not to neglect our duty in these areas. Caring for those in need is the single most frequently repeated command in the entire Bible. As we attempt to live this out, albeit imperfectly, there are some who are quick to criticize the church for it's shortcomings. Often the criticism is valid, other times it is based on faulty and even unbiblical reasoning.

This is embodied in  some of the popular Memes circulating on social media, which I will address as we go along.  Before we proceed, I will remind you of three things that I hope we can all agree on:
So with that in mind, let's look at meme number one: 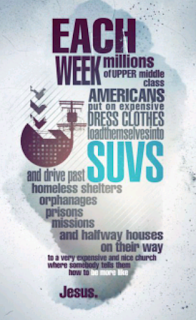 First of all, having a nice place to worship is not at odds with Biblical charity. Simply look at God's instructions to build the Tabernacle (Exodus 26) and later the Temple (1 Chronicles 28). Many years later Jesus Himself would worship in a similar temple, and while He certainly did challenge its corrupt leadership, He still acknowledged it as God's house (Matthew 21:12-13).

In all likelihood, these homeless shelters, missions etc. are operated and funded by many of these same churches. Those volunteering on any given day may very well be members of these churches. Who is to say that the people in the SUV may not volunteer there on other days?


Also, keep in mind that a church's activities in these areas may not always be immediately visible. Churches vary widely in terms of facilities, finances and human resources. In addition, different churches have different callings and giftings, so the methods they use may also vary. Just because you may not see the work directly on the church grounds does not necessarily mean that the church is not engaged.

Often, area churches will work together in parachurch ministries and consequentially can help many more people than they could individually. In the east Tennessee region where I live, examples would include .Knox Area Rescue Ministries, The Knoxville Dream Center and The Compassion Coalition,

So if you have questions regarding a certain church, why not actually contact the church and ask for yourself instead of jumping to conclusions? You might be surprised! 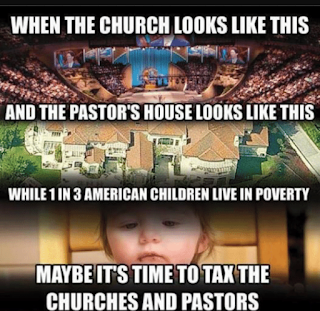 I do not deny this is a problem. I have personally left churches in the past over what I felt were inappropriate financial practices and will certainly never defend a church that participates in it. That being said, it is important that we don't take things to the opposite extreme as some do. There is nothing unethical about a minister being paid a decent salary. Jesus said the laborer is worthy of his hire (Luke 10:7, also see Matthew 10:10; Luke 10:7; Galatians 6:6, 1 Timothy 5:17-18 and Hebrews 7 1-11).

However, if a person has the leadership skills necessary to be a successful pastor, he is likely earning significantly less than he could working a secular job. Many pastors are grossly overworked, often being on call around the clock. Pastors generally also have to purchase their own insurance and pay their own Social Security premiums, both of which can be very costly. If your goal is simply to get rich, then ministry is certainly not the profession for you!

Nonetheless, the point is well taken. Especially in times like ours, it is more important than ever that churches and ministries handle their finances with the utmost integrity. I would encourage every ministry leader to meditate regularly on the following Scriptures:
As for taxing churches, the problem with that is that it would be punishing all churches for the sins of the few. For each ministry that does these sort of things, there are countless others who are faithfully doing the work. They may be smaller and less visible, but they are out there.

If churches were taxed, the ones hardest hit would be the smaller churches who are operating on shoestring budgets. The aforementioned faith based charities these churches fund would suffer greatly. In the meantime the big money ministries the meme refers to would still find ways around it. They could simply write off their private jets and other extravagances as business expenses, for instance.

Tax exemption for houses of worship has a scriptural foundation (Genesis 47:26; Ezra 7:24). Is it sometimes abused? Of course, but it is there for good reason and doing away with it would do much more harm than good. .

.And finally, a favorite of many politicians: 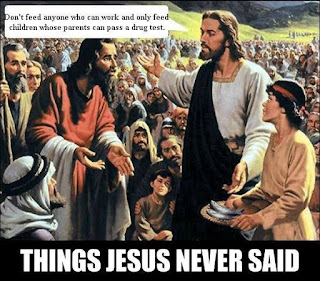 Not exactly. In fact, misconceptions in this very issue led up to one of the first attempts to kill Jesus! In Luke 4:25-29,  Jesus boldly proclaimed His mission to bring good news to the poor. Interestingly, though, this same discourse reveals a somewhat surprising overview of how this operates.

In verses. 26-27, Jesus referred to a time when a horrible famine was in the nation of Israel, but how many people actually received God's help? Only one, a widow who fed the prophet (1 Kings 17:9). Another time, there were many in the land who suffered from leprosy, yet God's healing power only came to one person, a man named Naaman, who likewise heeded the Divine directions given to him (2 Kings 5:1-14). The people who heard these words were so angry with Jesus the tried to throw Him over a cliff!

The point He was making is that God's provision is not unconditional. In carrying out His mission today, it is not at all unreasonable to expect proper accountability from those who receive the aid.  Churches and ministries have limited resources which come almost exclusively from voluntary contributions (which the contributors have already payed taxes on. This is why the churches and other non-profit organizations  don't pay taxes on the money again).


I once had a part-time job as a security guard for a church. When I first started the job and the pastor was going over the various responsibilities, he made it a point to tell me about people who came by the church seeking financial help. As he explained, there was a procedure they had to follow. For example, they would call other churches in the area to see if the people in question had been there first. The reason was that some people made their entire living panhandling from churches. While it is sad that this is the case, these people can quickly drain all of the resources from a benevolence ministry if proper precautions are not taken.

Interestingly, we see similar issues discussed by the Apostle Paul in his letter to his protégé', the young Pastor Timothy. In this Epistle, we learn that Timothy's church is establishing a program to care for its widows, which is certainly a noble effort. However, Paul gives some advice to his close friend which would seem surprising by today's standards. He tells Timothy that those widows receiving the aid must meet rigid requirements regarding age (1 Timothy 5:9), and they must have no family or other means of support (1 Timothy 5:3-16). They must also have a proven reputation for pure lives and service to the church (1 Timothy 5:10). Paul even goes as far as to say refuse the aid to younger widows, as they would abuse the privilege (1 Timothy 5:11-12).  The same compassion that inspires the church's charity should also inspire proper stewardship of its resources to see that they do the maximum good.

I will conclude with a challenge. It is very easy to criticize from the sidelines. If you see something you feel is not being done, have you considered that God may be giving you a vision to help do something about it? If you have never surrendered your life to Christ, that is where it starts. Then, find a good Gospel centered church to partner with and see what God does from there!